Florence and Working Through Your Bad Ideas 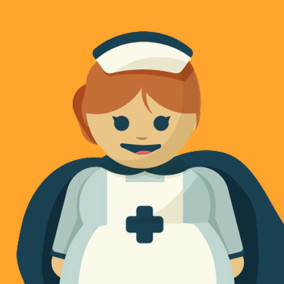 I was delighted to recently design Florence, an exploration of a tool that could help patients better keep up with their medications. (Read Laura’s breakdown of the whole project here!)

One of the most fun, challenging parts was designing the actual character of Florence, a “nurse” patients would interact with directly through texts. A human character like this needed to be recognizable, distinct, and of course, warm.

For a long time, I thought I’d be a better designer when I got to the point where my first idea would be the best one. I’d land on the right answer immediately every time. Lately though, I’ve started to embrace the Bad Idea phase. I’ve realized it’s not as unproductive as it might feel in the moment. Getting the bad ideas out of your system is what starts to get things moving so you can get to increasingly better solutions. The more things you know are wrong, the better you can understand why they’re wrong, then the better you can see what the right answer looks like and why it’s the best way to go.

Florence is a really clear, quick example of this in action! I started out with rough sketches and experiments in Illustrator of a generic nurse figure. Nothing felt quite right. (No eyes for a supposedly empathetic mascot? Instant no.)

The next bad idea I explored was nightingales. Literal ones. The character of Florence is named after Florence Nightingale, so a bird wearing a nurse’s cap seemed like a charming solution. Not so much in reality. A bird’s beady eyes and sharp beak didn’t feel warm and nurturing.  And it seemed too strange that a bird would be texting patients; birds don’t have thumbs! Birds don’t have phones! But bird research led to nurse uniform research. Which led to thinking outside the immediate nurse uniform stereotypes. Victorian and pre-WWII nurse uniforms are iconic in their own ways (capes! CAPES!) and make for a really graphic, clear design for a nurse character. Suddenly the sketches were getting a lot closer! Now that I was on the right track, it was time to hop into Illustrator. Version 1 on the left was fairly quick work, using as few shapes and colors as possible, now that I knew where I was headed. The final version on the right is 90% the same, but that 10% took almost as much time as the first 90%. And made all the difference! Hair, face, and outfit touches are refined and feel polished. (And that smile is now 100% less smarmy.) The ability to edit one’s own work (and process team feedback) isn’t instant. You need to be able to step away for awhile, even if only an hour, sit on it, and come back and see your work with fresh eyes.

So it is, once again, embracing the evolution. Bad to decent, decent to polished. And so on until your deadline! It’s gotta get out the door eventually. As Lorne Michaels, creator of Saturday Night Live said, “We don't go on because we're ready; we go on because it's 11:30.”

Plan to give yourself time to explore, to get it wrong a couple times before you get it right. Work through your bad ideas with confidence, knowing they’re just the first step to something better.

And check out our page on Florence and the thinking that went into her!

Nobody likes popups, so we waited until now to recommend our newsletter, a curated periodical featuring thoughts, opinions, and tools for building a better digital world. Read the current issue.